Alpacas were domesticated between the year 4000 and 5000 B.C.
Paintings made on rocks more than 8000 years ago were a reference to the interaction between the ancient Peruvians and the alpacas...

“Alpaca” is a Spanish word derived from the Aymara name “Allpacu”, or the Quechuan names “Pacos” or “Pacoshas”. Paintings made on rocks more than 8000 years ago were a reference to the interaction between the ancient Peruvians and the alpacas. Early inhabitants began the domestication process of alpacas between 4000 and 5000 B.C.

Alpacas had a strong impact on the ancient Peruvian cultures.

The use of alpaca fiber in textiles began around 2500 B.C., and became increasingly important through time in ancient Peruvian cultures. Woven textiles reflected different levels of power and were often given as tribute to the State or to local lords in return for favours or services, such as in barter trading.

It is estimated that there were more than 10 million alpacas in Peru before the Spanish conquest, and only one out of ten survived. The Spanish invasion and conquest resulted in a severe setback to the breeding development of alpacas. Also, the importation of foreign cattle resulted in the displacement of alpacas to higher, colder and more arid areas. At present, it is estimated that 3.7 million alpacas inhabit the highlands of the Peruvian Andes (In the areas of: Puno, Arequipa, Cuzco, Ayacucho, Huancavelica and Apurimac), representing 80% of the worldwide alpaca population.

Alpacas are the main source of income for many Andean families in Peru.

To more than one million small alpaca farmers in the central Andes of South America, alpacas are an important pillar for their livelihood.

2. Alpacas are sustainable and gentle for the land ❤

They do not damage pasture when grazing.

Alpacas nibble only the tops of grasses and other plants; they do not rip plants out of the ground, resulting in less disturbance of the vegetation and allowing it to grow back.

Alpaca feet do not damage the pasture.

In contrast to goats and sheep, which have sharp hooves that damage pasture and soil, alpacas have two toes with toenails on top and a soft pad on the bottom of each foot that minimizes their effect on pastureland. In other words, the grass system is not disturbed by alpacas, allowing the soil and their habitat to remain intact.

Alpacas do not use water or land destined for food production.

The natural habitat of alpacas is about 3,800 metres above sea level. At this altitude, the water supply is natural and the land is generally not suitable for agriculture. This makes alpacas more environmentally friendly than all other fibre-producing livestock that often contribute significantly to serious environmental problems. Vegetable fibres also represent a problem for the environment. For example, in Australia, 2,830 litres of water are needed to produce 1 kg of cotton.

The efficiency of alpacas is especially notable considering that they require much less food intake than most other fibre-producing livestock. Cashmere goats, for example, require at least two times the amount of dry grass that alpacas need to produce 1 kg of clean fibre.

3. Unique fiber in the world ❤

Excellent appearance and durability.
The physical characteristics of alpaca fibre, such as its range of colours, structure and resistance, make it possible to create garments of an exceptionally fine quality, luster and drape, properties difficult to replicate using any other textile fibre. The strength, density and curvature of the alpaca fibre make alpaca garments very resistant to wear and tear.

Efficient humidity absorption.
Due to the hygroscopic characteristics of the alpaca fibre, garments made of alpaca readily absorb moisture from the environment. In other words, the uncomfortable feeling of a “damp garment” is minimized in very humid climates.

Incredibly soft touch.
Microscopically, animal fibres have the appearance of a palm tree with scales. While the height of the scales in wool is between 0.65 to 0.90 microns, the alpaca fibre hardly reaches 0.25 microns. These characteristics make alpaca fibre much softer and smoother than other animal fibres or cotton.

High performance in extreme weather conditions.
The physical characteristics of alpaca fibre allow the manufacturing of products with superior performance in extreme climates, in both cold as well as warm weather. Moreover, alpaca fibre is more flame resistant than vegetable or synthetic fibres. In case of fire, alpaca does not melt onto the skin as synthetics fibers do. 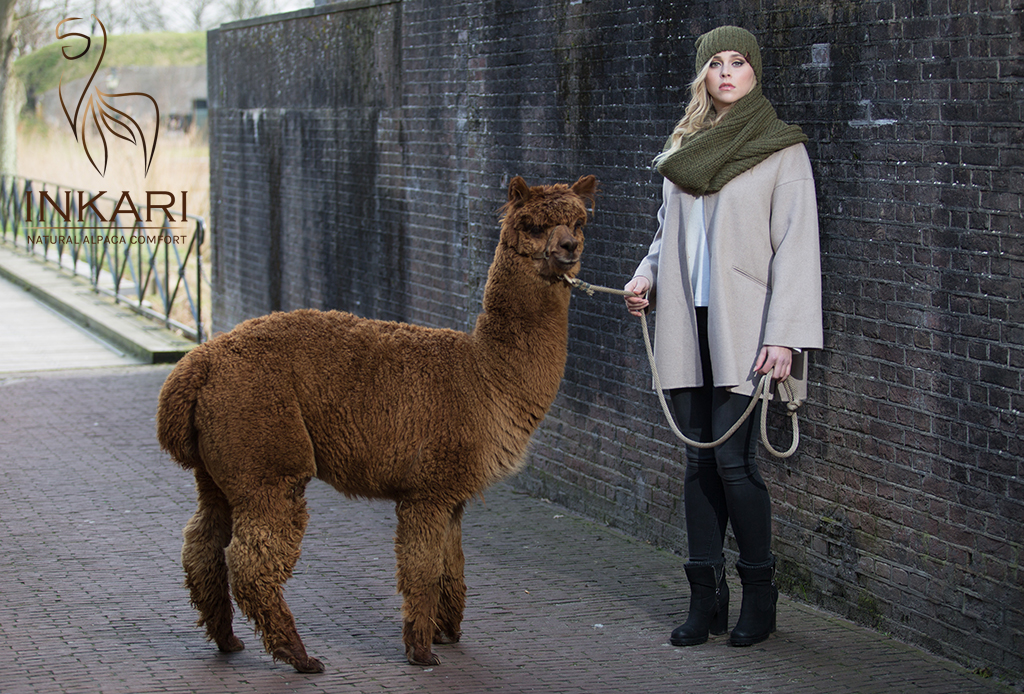 The natural colours of alpaca are undyed, hence environmental issues associated with the dyeing process are minimized.

Alpaca fibre comes in more than 22 natural colours. These colours are classified into nine pure colours: White, light fawn, light camel, camel, light brown, brown, grey, brown/black and black with many other subtle shades and hues. Therefore, alpaca fibre can be blended into an infinite array of natural colours, including combinations that do not occur naturally, thereby avoiding industrial dyeing and saving important amounts of water and energy.

The treatment system for the water used in the washing process of alpaca fibre requires less chemicals and energy than what is needed for other animal fibres.

Compared to other animal fibres, alpaca fibre has a low grease content (2.8 - 3.9%), which means that much less energy and chemicals are required to treat the water used for its washing process.

Alpaca fibre is an excellent insulator and additionally it is highly flame-resistant, which makes the fibre optimal for home products.

Alpaca fibre is an excellent insulator for both heat and cold. Due to this property, home products made of alpaca fibre like carpets, blankets, quilts and curtains are very well-known within the category of home products.Alpaca fibre is also highly flame-resistant, making it an important eco-friendly natural fibre material used by the construction industry to insulate homes and businesses.

Alpaca video: The story of alpaca wool from Peru

If you haven't had enough yet and you want some visual with the story as well, we have something for you.
The Inkari crew has travelled to Peru and risked their lives between the wild alpacas..! Enjoy ;)